Okay so I really had to convince myself that these benches were what I was going to post for my monthly DIY and after 29 days I finally caved. I have some fall decor DIYs whipped up and apparently I’m getting some Autumn fever so I just about featured one of those instead but decided next month would be more timely for a craft like that. The good news is when September hits I can post the DIY early in the month since it’s ready and I won’t do my regular Procrastinator-Alicia style…like I’m doing now!

August’ DIY project is so super simple I could probably just post pics with no words and y’all could put it together. But for the sake of “writing” a blog I won’t.

These DIY benches will make for a great way to sit outdoors and enjoy the cool crisp Fall mornings (right around the corner) while sipping a steamy cup of coffee, gather friends and family during an evening of BBQ and entertainment, or even to stretch out on for an afternoon catnap…I’ve actually done that last one a time or two.

Here’s what you’ll need for this sweet little patio transformation…and I apologize ahead of time for the horrible pictures, the sun has been shining bright which I’m thankful for but the lighting is pretty harsh in the photos :

Two 3×12 wood planks (at your preferred length, ours measure 4 foot on one and 6 foot on the other)

One rag for wiping dust

Wood stain (your choice of color)

First off sand the planks so they’re smooth, the last thing you want is risking splinters when you put these benches to use later!

Wipe the dust off from using the sander and prop your planks up against something that won’t matter if it gets stain on it (scrap wood works well).

Wearing gloves wipe the stain onto the wood plank using gentle, even strokes and applying it in the direction of the wood grain.

**Side note #1: If you do end up with stain or polyurethane on you, you can use a rag and mineral spirits to remove the stickiness.

Wait at least 24 hours before applying the polyurethane.

Just the same process as the stain you’ll want to wipe the polyurethane (aka sealer) across the plank, again in the same direction as the wood grain. This is an important step to do as it helps aid in protecting your wood pieces from inevitable weathering.

Three coats is a good rule of thumb with at least an hour dry time in between; my husband would actually tell you to lightly sand and wipe down in between the three coats of sealer once they’re dry  but I’m not going to get that finicky since this is an outdoor project. I will mention that sealing is something you’ll probably want to repeat once a year (a bit of sanding first, followed by a few coats of sealer).

Lastly you’ll want to stack up the blocks (two high) and position them the correct distance apart (the length of the plank apart) use a tape measure if needed. You could line them up evenly with the edge of the board meeting the edge of the cinder block (like we did, see next photo below) or you could do overhang.

**Side-note #2: Kittens aren’t a necessary requirement for this project…more on her and her brother in a future post…

I mentioned the extra 4 blocks in the items needed list and that’s if you want to do a planter. I’ll just include pictures to show you how that looks — pretty self explanatory (visually). The soil in those planters does not go all the way down to the patio concrete because we have the bottom cinder blocks turned the opposite way which you can see in the photos below.  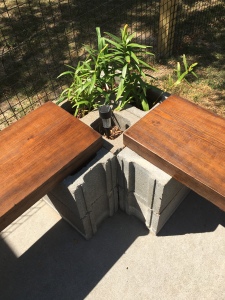 ***On the planter the bottom two cinder blocks have the holes facing outward but the top layer of two blocks are facing upward which gives the option to create the planter.

And here’s the final finished project!! 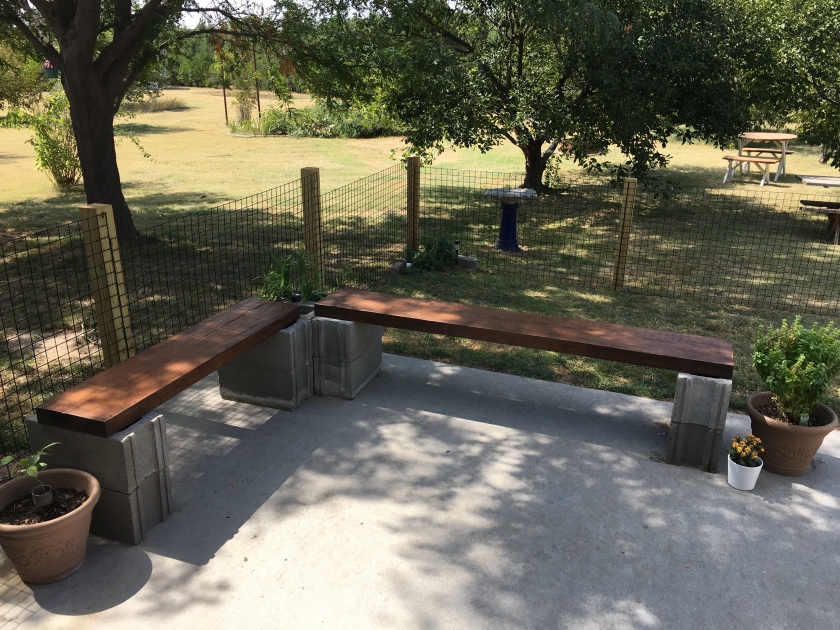 What I love about this “patio furniture” is the fact that it’s super cost effective, durable, and low maintenance. Literally this “patio furniture” cost me around $20 to make after paying for the stain and sealer. Nate picked up the planks from his job as they were no longer needed and the cinder blocks came from his folks’ place.

Perhaps one day, if I’m feeling extra ambitious, I’ll sew a rectangle cushion to set on top of each bench, but for now I’m just going to rely on the God given one I alre…….nevermind I’ll hold that thought…

…Speaking of Him I’ll leave you with an encouraging verse and well blessings!!

That word, faith, is where the true Christian meets authenticity in their relationship with Jesus. That word changes my life in a beautiful way everyday!

Take care y’all! And as usual let me know if you end up creating this DIY!